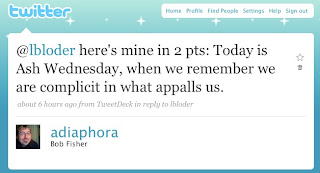 Lead us to repentance

Dallas Willard begins his classic treatise on the spiritual life, “The Divine Conspiracy,” with an anecdote about a pilot who, disoriented, pulls back on the stick to ascend and flies straight into the ground.

“This is a parable of human existence in our times … most of us as individuals, and world society as a whole, live at high speed, and often with no clue to whether we are flying upside-down or right side up. Indeed, we are haunted by a strong suspicion that there may be no difference…” (2)

Life today feels similarly out of control. Many of our old assumptions no longer hold water. Its hard to know if course corrections will launch us into the clear, trigger a “Mayday!” or auger directly into the ground.

But maybe it has always been this way. In today’s Gospel, Jesus warns the disciples who are busy dividing the spoils of His victory and vying for pride of place in the kingdom that what looks like the head of the line is really the end. ‘Whoever wants to be first must be last of all and servant of all.’ (Mark 9:35)

The first must be last. Leaders must serve. Little children have the keys to the deepest insights. Jesus tells us here that seeing is not believing, that there is a deeper and truer reality that lies beyond what our senses tell us is real. This is the same reality that, the prophet Isaiah tells us, levels the mountains and raises up the low places, the reality that Mary sees filling the hungry and sending the rich away empty. And with our solid ideas about security, well-being, risk and reward cracking a bit, if we listen closely we can hear rumblings of this “great reversal” around us.

That’s why Lent is an important part of the life of faith. No matter how certain we are of our beliefs, how comfortable we are with our actions, we need times when we can check our bearings and reset our instruments to be sure we are on the right path.

Popularly, Lent has been for many people a time of self-denial through giving up little pleasures – chocolate, perhaps, or TV or blogging, or dropping our spare change in a charity box. But giving up only gets part of the blessing of Lent. Its fullest expression comes when we give to – give to others, and give to our relationship with God.

My hope and prayer is to use this Lenten season to clear away some of the unnecessary clutter in my life and to focus on who God is calling me to be. In these coming weeks I plan to:
Tomorrow I will receive a cross of ashes on my forehead with my community, remember that I am dust, and hear the important message of repentance. And as I am turning from the blurred focus, disorientation, and upside-down flying caused by this high-speed life, I will try to keep my focus on the goal I am called to pursue:

So we are ambassadors for Christ, since God is making his appeal through us; we entreat you on behalf of Christ, be reconciled to God. For our sake he made him to be sin who knew no sin, so that in him we might become the righteousness of God.

The disciples come across as so “human” in this story. First they are so confused by what Jesus is saying about his fate that they don’t even raise a question for fear of looking stupid, an emotion all school children relate to (and many of us adults). Then they are arguing among themselves about which one is the greatest! — like a group of children choosing leaders for a game they aren’t sure how to play. When Jesus calls them on it — you’d think they would know by now that he knows the inner secrets of people’s hearts! — you can see them looking down and keeping their mouths shut, like children caught doing something they know they shouldn’t.

It’s fascinating, then, that Jesus brings a child into their midst and welcomes the child. Jesus is chiding them for their all-too-human need to be “first,” but he is also welcoming them as they are — as children. We try so hard to look smart (or just not look stupid), to be the greatest, and Jesus knows it. In fact it is just these tendencies — knowledge, power and control — that cause so much trouble in “religion,” as Jesus often points out to the religious authorities.

Can you hear yourself welcomed by Jesus despite what you don’t know and your desire to be “first”?

(From our Kairos online scripture discussion)
Posted by Bob at 8:37 AM No comments:

Why is the church more concerned about people who are 'spiritual but not religious' than those who are 'religious but not spiritual'?

Just 10 days ago a friend sent me an email titled "What really happened on the Hudson" containing just this image: 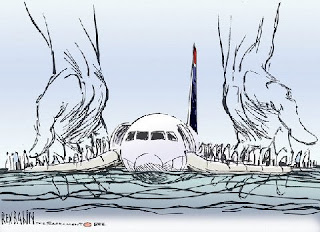 The image of God's presence in the near-miraculous landing of the plane in the river, with no loss of life and no serious injuries, barely registered with me. It angered a good friend who also received the email, but didn't know how to respond. Then when Flight 3407 fell from the sky over Buffalo Thursday night, she said to me: "People were quick to see God's role in saving that plane in the Hudson. Where will they say God was in Buffalo?"

While people are quick to assign God credit for the good things that happen to us -- heroic and skillful pilots, the ability to score a touchdown, the ability to earn a good living -- most of us are not quick to look for God's wrath in tragedies. There are some, of course, who see God's direct action there -- who think that God aimed Katrina at "wicked" New Orleans, that the poor somehow deserve to be poor, etc. What's more common is the view that our health, wealth and comfort, our relative safety, and American power are signs of God's special favor.

This is an old theological problem. Martin Luther criticized the "theologians of glory" who discerned God's presence in victory and blessing yet diminished the the importance of Christ's suffering both for and with us. Luther knew that a theology of glory would justify those looking to their own power and victory, but a theology of the cross, a recognition that God's true strength is revealed in vulnerability and even death, is truly good news to all of us who are weak and struggling, as St. Paul put it, with being unable to do the good we want to, and doing the evil we hope not to do.

It's easier to assume that outward blessings are signs of God's favor, and that sickness, poverty and disaster indicate God's displeasure. Years ago I talked with a hospital chaplain who told the story of her work with a mother whose young daughter was gravely ill. The mother belonged to a church whose theology preached that such sickness was a sign of sin, and the people of the church - including the pastor - seemed uncomfortable visiting and comforting her. Jesus confronted this attitude when he met the man born blind in John 9.

His disciples asked, "Rabbi, who sinned: this man or his parents, causing him to be born blind?" (9:2, MSG)

This is not just a misperception by the religious establishment; the question is asked not by the Pharisees but by his followers. Christ turns the question on its head, challenging them to look beyond the outward manifestations of our well being that we attribute to God's glory into what God is able to do (which is headed, ultimately, to the cross).

Jesus said, "You're asking the wrong question. You're looking for someone to blame. There is no such cause-effect here. Look instead for what God can do. We need to be energetically at work for the One who sent me here, working while the sun shines. When night falls, the workday is over. For as long as I am in the world, there is plenty of light. I am the world's Light." (9:3-5, MSG)

Sadly the "cause-effect" Jesus negates is very much alive for us. Just Thursday night at our Kairos book group were were noting that sometimes the people with the most passionate faith are those whose lives are transformed from the depths of loss, addiction, poverty and rejection. The most passionate conversions may be among those who start out farthest from the church and faith. As Lynette said, "when things are going well, who has need of a savior?" We had some discussion around Suzanne's suggestion that Christians sometimes still look more at a person's works than their faith. We sometimes see God's presence more clearly in healing one person than in accompanying another through illness and death. We may find God less able to work through "unrepentant" homosexuals than through those who choose to gossip. Jesus' claim that he came for those who are sick not just those who are well sounds as strange to us as it did in his day.

When we rely too much on God's glory, we are looking for God to act as we do; to value and reward what is important to us. We desire to be rich, to be healthy, to avoid suffering, so of course that is how God would show favor. And those things are blessings. But if we want to get at who God loves, we have to look beyond glory to the cross, specifically to the foot of the cross, where we gather with all God's people -- the sick and the healthy, the poor and the rich, the afflicted and the comfortable -- who cry out to him for peace.

So where was God in Buffalo? I believe God was in and under Capt. Sullenberger's coolness and skill passing over optional landing zones for the receptive surface of the Hudson, and with the flight crew of Flight 3407 as they struggled to right their rolling craft without time to utter a "Mayday!" I believe God both weeps with that families of the 49 who died Thursday night and celebrates the gift of life for the 155 who walked off of Flight 1549.

Since this question is often asked in the face of tragedy, I raised the question to some friends on Facebook and Twitter. Here's some of what they said:
Who says you can't proclaim the Gospel in 140 characters or less!

Oh, and how do we share the cross with people who are only looking for glory? @Somecomic to the rescue:

Somecomic @adiaphora i like to ask hem how thats going for them... :)

Pete Rollins (Ikon, author of "How Not to Speak of God") offers a powerful confession on his blog:

Without equivocation or hesitation I fully and completely admit that I deny the resurrection of Christ. This is something that anyone who knows me could tell you, and I am not afraid to say it publicly, no matter what some people may think…