Not playing the game

One of the things that gives many people difficulty with Christ's passion is that, brought up on charges, he refused to mount a defense. In a culture that defines itself by competing and winning, Jesus didn't even play the game!

Kester Brewin has a great series of posts exploring this reality as part of the Via Crucis 2007 grid blog. It starts here. He notes that when Paul goes to Jerusalem (Acts 21-22) he mounts a passionate defense, aimed, Kester suggests, at his ultimate goal: a confrontation at Rome. While he is in a similar situation to the one Jesus found himself in, "Jesus remains virtually silent before his accusers. He simply refuses to defend himself. Others make claims about him; he simply says that that is what they are claiming."

In the series he draws some compelling parallels: Paul's insistence on making a play at Rome with Judas' attempt to force Jesus' hand and provoke political Messianic action by betraying him. The strategic move to reign in Christianity as a state religion by the master tactician, Constantine. The church as "strategic organization." All these are set against the reality of the Cross:

At Golgotha, God declares the end of strategy.
God will not play our power games.
God is.
God loves.
There is no win or lose.

Ah! To play, perchance to win. That is the way our culture thinks and breathes. "Do or do not. There is no try," as Yoda says. Certainly there is no "be" -- unless it involves consuming some "meaningful" possessions and becoming successful enough to "serve."

Kester parses the message of the Cross and comes to this point: Jesus' refuses to engage the games of strategy that tried to trick him, betrayed him, tried him and crucified him. Because all those games are expressions of Self. We play them for our own motives, our own gain -- even if we pretend to count them as loss, as the hymn says. Self "pretends that it is powerful and influential," Kester says, and nowhere is it more insidious when that pretense is on behalf of a good cause. So we play insider-outsider games in the Church (for their own good, you know), and sometimes end up trying to beat the media, government, and other expressions of culture at their own games.

Yet -- I listen to Jesus on the Cross. Listen to love poured out in a way more likely to prompt people to say "loser!" than "lord!" And I look at my strategies -- removing mental clutter, "getting things done," communications plans, nurturing a worshipping community.

From the Cross, Jesus says to me: All these gains are loss unless you empty yourself. Because if you are full of yourself, there is no room for Me... Lord, have mercy!

Your attitude should be the same as that of Christ Jesus:
Who, being in very nature God,
did not consider equality with God something to be grasped,
but made himself nothing,
taking the very nature of a servant,
being made in human likeness.
And being found in appearance as a man,
he humbled himself
and became obedient to death—
even death on a cross! -- Philipians 2:5-8 (NIV)

To: members@church.com
From: questing@apostles.net
Sent: 1 April 2007, 14:37 (GMT -5)
Subject: Next gathering
Fellow questers,
In recent months and years, we've been on a journey, searching for a way of being the church that fit with our sensibilities and experiences. We've been forming questions about who God is and how we relate with God. We've been questioning the nature of the church and its snuggling up to the state, and wondering how to do better than just shine the pews. We've experimented with Emergent(tm), missional, alternative and other models of worshipping and serving.

I thought we were making good progress. However, in the bookstore last night I discovered that these issues had already been resolved: 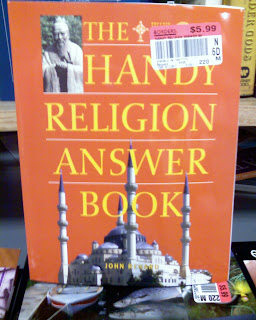 I picked up a copy for each of you, so we can suspend our quest and get back to being good little sheep.

Now on to more important matters: Where do you want to have brunch next Sunday?
Posted by Bob at 2:31 PM 2 comments: