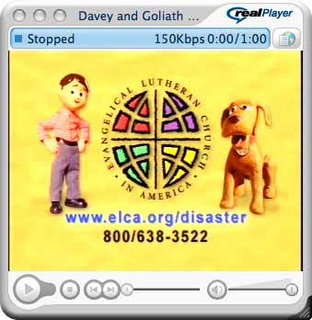 Some of you may remember "Davey & Goliath," the animated kids series of the 60s and 70s sponsored by the former Lutheran Church in America. I used to watch it on Channel 6 early Sundays and wonder...what are Lutherans? Guess I absorbed something...

Anyway, the ELCA has a cool disaster PSA for kids featuring the pair, reminding kids (and grown ups) that "God is there" in a disaster, in "the hands of the people who help."

One of the cool things about my job as the communicator for our synod is that I get to work with the public media. As a former newspaperman myself, I appreciate the role that the media can have in raising the visibility of the church. And a good placement can give our folks a reason to talk to friends and neighbors about what the church is doing.

Media relations has its frustrations, too. Attention often comes for the wrong thing. Our former bishop did some TV work when the ELCA's discussions of sexuality were in the news. I remember the day that the church released its recommendations not to change policy. I had a newspaper interview lined up and a TV crew on its way for an early afternoon interview. But when the TV assignment editor found that the church was not going to ordain persons in same-gender relationships or bless such unions, they turned the van around.

This week I was excited when KYW NewsRadio 1060, a powerful voice in the Philly radio market, called about doing an update on local efforts to assist in Gulf Coast hurricane relief. Nancy Griffin, who is the religion reporter, had been out at Christ Lutheran in Kulpsville last fall when they launched the first of a series of trucks laden with relief supplies on its way to Jackson, MS. She interviewed me and a local Lutheran who has been down to work at Grace, New Orleans four times (so far).

So while it was wierd to have a microphone in my face standing on Independence Mall, it was very cool to tell KYW's vast audience that disaster response is in the Lutheran DNA...that for many of us living out the Gospel with the vulnerable and in-need is important. Well, will see if I told them....my soundbytes could all end up in the outtake bit bin. The piece is slated to air either Saturday or Tuesday, the anniversary of Katrina's landfall. 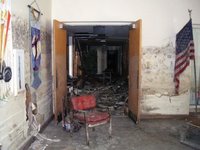 I had lunch the other day with Pastor Dan Duke of Grace Lutheran Church in New Orleans, who was in our area on a pastoral exchange with Redeemer Lutheran in Jamison. A year after Katrina changed his call, his life, and the lives of his congregation members, I was fascinated to hear about the wrenching year they have had. While some long to "return to normal," Pr. Dan says what the city will emerge to, maybe 10 or more years down the line, is "a new normal." Pastorally, he's had to deal with people who have lived in a disaster zone for a year, with a congregation that includes people who transferred out, people whose extended family lost multiple homes, and those whose greatest inconvenience was waiting for cable to be turned on and want to get on with things. In the midst of this I was impressed by Pr. Dan's take on the experience of being reduced to waiting on the kindness of strangers:

“Strangers are praying for us. Strangers are helping to rebuild our church, and in the process they are not strangers any more,” Pr. Dan says. “If what’s happening to Grace isn’t a powerful message that God cares about us, I don’t know what is.”

At times like this a denomination can shine. Dan said his bishop was on the phone with him making arrangements to continue his salary before he even thought about that, and that the Gulf Coast Synod has been able to keep most pastors in place thanks to gifts from around the ELCA. An appeal to ELCA churches named Grace (there are more than 300 of them) around the U.S. has helped fund repairs to their building. Volunteers from all over have showed up to muck, to rebuild, and even delievered a used organ.

Pr. Dan's main point was this: The smallest bits of help are appreciated, and it's definitely not too late. Especially as we prepare to be inundated by media "anniversary" stories and perspectives, remember to pray for the people who struggle every day living amid constant reminders of disaster, for those who feel vulnerable in the only place they know as home, and for the pastors and church leaders who bear their burdens while managing their own.

Read more of what Dan had to say here.
Posted by Bob at 8:32 AM No comments:

For a presentation I will give next month, I'm thinking about the ways that existing congregations can integrate some of the insights of the "emerging church" movement. For example, at the congregation I'm part of we've included elements from the "alt.worship" movement, and tried to increase the interactive, participatory elements. We've also worked at getting out of the building and into the community for fellowship, meetings and discussions. It continues to be a challenge to be aware of the "consumer" models we're steeped in and to inject missional elements.

But my experience is limited. I'm interested in what you're doing, and thinking, about bringing emergent insights into established congregations. Can it be done? Can a community "blend" in ways that embrace people who have been served by the traditional church and those who need something different? Is it best to start a new service, or a new cohort, with a different ethos? Have you run into brick walls in the process? What would you want to share with mainline/established church folks exploring this brave, new world?
Posted by Bob at 8:08 AM No comments:

Who says you can't get good stuff free? One of my most listened to albums of the year, Derek Webb's "Mockingbird," will be available for free download in 12 days. I love this collection because it doesn't flinch addressing some tough issues -- war and peace, poverty and justice, church and state -- from a faith perspective (and with pretty good theology, mostly). I'll try to write about some of its highlights in the coming days. Mockingbird hangs together as a collection very well. I saw Derek and his wife, Sandra McCracken, at Circle of Hope in Philly this spring, and they devoted the second set to playing through the album, without comment, and it was powerful.

Derek posts this about why he's offering the work for free:

i love music. i have grown up with music as a close confidant. and i believe in the power of music to move people. there's something remarkable about the way a melody can soften someone to a new idea.

as an artist (and often an agitator), this is something i am keenly aware of. my most recent record 'mockingbird' deals with many sensitive issues including poverty, war, and the basic ethics by which we live and deal with others. but i found that music has been an exceptional means by which to get this potentially difficult conversation going. and this is certainly an important moment for dialogue amongst people who disagree about how to best love and take care of people, to get into the nuances of the issues.

Hey, what goes together better than learning and a party? Karen Ward of church of the apostles will be in Northeastern PA on Sept 16 for an Emerging Church Learning Party sponsored by the Episcopal Diocese of Bethlehem. I've been asked to give a talk as part of the event. But despite that, it should be a great event :) !! It's from 10 am to 5 pm at St. Stephen's Episcopal Church in Wilkes Barre.

Last September I attended one of COTA's learning parties on their home turf in Seattle. It's a great opportunity to get explore the emerging church and postmodern faith and learn how existing mainline congregations can engage what is going on in our culture. If you're thinking about how your congregation can connect with postmoderns, this learning party with COTA's postmodern guides can help you get started. If you attended our "Emerging in the Mainline" event in February, you might want to get a couple other folks from your congregation to this event to build momentum. If you missed that event, don't miss this attempt to learn first-hand from a Lutheran/Episcopal group blazing new trails in a highly postmodern and unchurched communitiy.
Posted by Bob at 12:18 PM No comments: