Wednesday our synod is hosting Karen Ward for a presentation on "Emerging in the Mainline." Karen's a great person to lead this conversation for us because she's lived in the bowels of the mainline church for a long time, and she lives in postmodern culture. She did a great job translating to mainliners at the PA Pastor's Conference last fall (I blogged about it here).

Trying to sneak in some reading in between shoveling snow and last-minute prep for the event, I came across this quote from Karen in Gibbs and Bolger's "Emerging Churches":

The emerging church is being willing to take the red pill, going down the rabbit hole, and enjoying the ride. It is Dorothy not in Kansas anymore yet finding her way home. It is Superman braving kryptonite to embrace Krypton. It is sight seeking wider vision, relationships seeking expanded embrace, and spirituality seeking holistic practice. It is a “road of destination” where Christ followers, formerly of divergent pasts, are meeting up in the missional present and moving forward toward God’s future.

If that intrigues you, stop over to Christ's Lutheran in Oreland on Wednesday. (It's too late to offer you lunch, but there's room for more in the presentation/conversation.)
Posted by Bob at 11:51 AM 4 comments:

I've started reading "Emerging Churches" by Eddie Gibbs and Ryan Bolger. I've read a number of books on emerging-missional church (ht:TSK), and this one is different. Gibbs and Bolger teach at Fuller Seminary, and the book is the result of five years of research and interviews with leaders who are building emerging communities. Many books offer one person's perspective, one community's history. And because the journeys that are emerging are particular to the people and places involved, they're extremely helpful. They give the reader a window into a community and allow us to draw what lessons we can from the experience.

"Emerging Churches" is helpful at giving an overview of the conversation -- "movement" is too strong a term, they suggest -- and identifying themes across the broad spectrum of church expressions that might be called emerging-missional. At the outset, they identify three overarching themes seen in such communities: They identify with the way of Jesus, transform the secular space (rather than draw people from secular space into 'church'), and live in community. After examining these practices they offer this basic definition of "emerging churches":

Emerging churches are communities that practice the way of Jesus within postmodern cultures.

They offer nine marks or "core practices" of emerging churches, listed below (with helpful annotation from The Blind Beggar):
I find this list really useful because it gets beyond the whole "candles, coffee and cool video" mindset that thinks "emerging" is a style of worship. There certainly are communities that are adopting style as a way of drawing missing generations into church. But that approach "misunderestimates" (ht:W) the magnitude of the postmodern shift that is going on. What they are pointing to here is a radically different way of thinking of ourselves as followers of Jesus and, then, of being his body that doesn't fit will with our prevailing modern, Christendom, institutional view.

Gibbs and Bolger's list helps because it is style-independent. It's about more holistic Christian practices -- taking Jesus seriously as a teacher, connecting to and serving the ordinary world (not just the church institution), participating meaningfully (the work of the people) and reorienting the nature of leadership -- that could (in theory at least) work in almost any style or polity open to reform for the sake of the Gospel. Not that it isn't a challenging list, and that implementing it isn't hard work -- but it will be hard work in a new community or in an existing congregation.

Their analysis is helpful on a couple of points. They note that the period of deconstruction that often begins an individual's or community's exploration is a necessary part of the journey and is (when it is healthy) deconstruction leading to reconstruction. The caution to us is not to be so anxious or threatened by deconstruction, but to give it time and see where it leads -- to discern the spirits behind it.

The practices all seem to flow out of the first one, identifying with Jesus. Jesus' ministry was one of radical inclusivity that pretty much ignored the religious authorities and transformed people where they were, in the midst of life. His band of disciples modeled an interdependent community that was continued by the earliest church. Serving the least of these was key, and converts were called immediately to significant roles in the kingdom, not pew-warming (think of St. Paul). Jesus' leadership was remarkably interpersonal and non-hierarchical, considering what he could have done with his authority (and in fact critiqued the existing hierarchy). And he certainly taught a new spirituality deeply grounded in Torah and tradition.

Churches based on these nine marks might actually look more like those described in Acts and the epistles than the institution we've come to know and love.
Posted by Bob at 9:54 AM 1 comment: 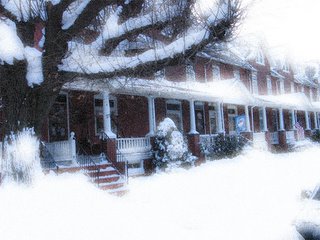 Well, that's what my neighbor measured on his picnic table. It felt like a lot more shoveling the cars out. But it's amazing how the block comes together in a pinch. Folks who rarely see each other helped each other out, fortified with hot chocolate and peanut butter cookies, and the guys with snowblowers were all over the place. Glimmers of community break into suburban life. Sweet! Now, on to Monday morning...
Posted by Bob at 10:48 PM No comments:

Working on a study of "The Divine Conspiracy" by Dallas Willard for our book group, I read up on Martin Luther's view of faith in light of Willard's critiques of "gospels of sin management."

1. An active response to the gospel
2. A personal relationship with God, and
3. Lived out in glorifying God and serving one's neighbors